The tourist town of Ventimiglia makes the news globally as refugees camp on its beach.

We’re in holiday mood, as are probably many others driving this freeway. The coastline of the Italian province of Liguria, next to the French border, is a continual range of rugged wild hills running to the sea. Fishing used to support the small towns and villages squeezed into the intermittent deltas along the Mediterranean. Today tourism pays the majority of the bills. The beaches are full, with people soaking up the sun, or seeking the shade of colourful umbrellas. The last rocky beach touching the French border, by Ventimiglia, is not full of tourists though but of refugees. 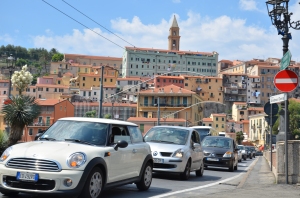 The road from Ventimiglia to France is free and open to everyone – except to the refugees camped on the beach and in the railstation.

It was in the newspapers just before we left home, how the French authorities were refusing hundreds of refugees in Ventimiglia access to France. The day we passed by the town, on June 20, the Swiss newspaper, the Tages Anzeiger, wrote that 170 refugees were camping out along the waves, 110 of them Muslims. About 600 others were held at the town’s train station, taken care of by the Red Cross. The refugees came across the Mediterranean on boats, from the war torn countries of Sudan, Somalia, Eritrea and the Ivory Coast. They’d escaped the dangers of their countries, endured the gruels of an ocean crossing to get to a place where no one wanted them. Another Tages Anzeiger report from June 12 stated that within a week 1,439 illegal refugees tried to pass the French border. 1097 were sent back to Italy, which is struggling to deal with the masses pouring onto their beaches. The Italian government is demanding that the other EU states come to their aid. No one denies they need help, but there is no consensus on how that should look. Rising right wing groups all over Europe are pressuring their governments to put a halt to more immigration.
My holiday mood diminishes as I think of these people down on the beach and in the train station. What made them leave their country at such perils? What did they think, what was promised them, would await them in Europe? Probably not this.
We never do see a border crossing along the freeway. Just that the signs are now in French, not Italian. Monaco comes soon after Ventimiglia. It reminds me of driving down one street in Nairobi, Kenya some years ago. On one side were big expensive houses, on the other side was a slum. That close. And that far away.
We drive on, through the Grand Canyon of France, and bike through the lavender fields. The warm perfumed air drives any thought of refugees far away.