The power of story and song: between tradition and change

They couldn’t be prouder if they were high school graduates – these two little boys who’ve just spent their first afternoon in Kindergarten. Solemnly Fynn walks home with his bright orange security band, as if he was wearing a graduation gown. He seems aware that this heralds a new period in his life. And he’s ready for it!

Their teacher is from Germany, not Switzerland. That means she speaks what we call ‘high german’ here, the real German, the written one. We Swiss all speak our dialect, which varies depending on which region of the country we come from. It’s related to high German, but distinctively different. Good for the kids is that they will have a head start in Grade one – high German is the official school language. It probably works better too, for the children of migrants, and judging from the parents that came out of the Kindergarten while I waited for the twins; there are a number of those. Migrants tend to speak high German, not dialect. 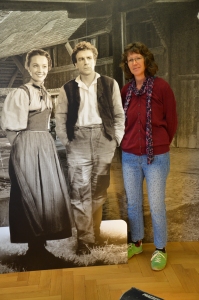 Kindergarten though, is usually where kids learn the Swiss songs – old ones, new ones. They hear stories in Swiss dialect. Songs and stories define culture. Many, including the mother of the twins, are concerned that the kids are losing part of their culture when they have foreign teachers, especially when they are young. It’s not that their mom isn’t open to other cultures – she has a very open mind, in my opinion. But she also knows the value of preserving culture.

It’s a bit of a dilemma, isn’t it. While migrant workers (in this case the German teacher) broaden the horizons of a country, bringing in new ideas and ways, they will also in time affect the culture of a country. That doesn’t have to be bad. But our traditions are still dear to us – just as they are to the first nations of Canada, or any other peoples.

Switzerland is quite heavily dependent on migrant workers, especially skilled ones, to fill jobs. Like this kindergarten teacher. We’re becoming more and more multicultural. What will that mean to our traditions? One thing is sure: there’s nothing more sure than change. And no country is immune to change.