In the span of a lifetime: by hand, mechanization, then digitalization 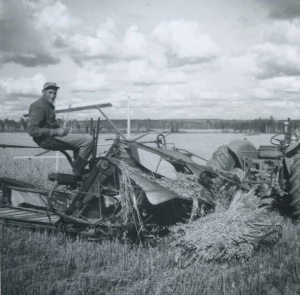 What struck me when Markus was reading his father’s eulogy was the tremendous change that Hans Stamm experienced in his lifetime. Hans wrote his own eulogy. Born in 1928 as a peasant farmer’s son, he remembered when wheat was harvested with a scythe, picked up and bundled – all by hand. He told of the progression to a mower, then the binder, and now the most modern of threshing machines. Wheat was mowed with a scythe thousands of years ago already. There had been some change, some mechanization but it was slow up until his lifetime. In the count of time of man, some millions of years, they tell us, what is the span of a man’s life? Yet in the span of Hans’ life, our world changed drastically. It’s hard to grasp really. 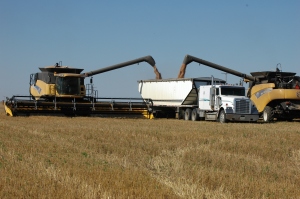 Hans’ generation saw immense progress in mechanization, and then in their senior years the coming of the digital age.Rural farm folks of his generation come from strong traditional roots put down by generations of doing things the same way. My father-in-law used to say to my husband: “Things were never done like that before!” That meant: you don’t do it that way, it was never done like that. Hearing Markus read Hans’ words, I understood a little better what it is/was like for that generation to see their children and grandchildren make changes on the farm and in their lives that seemed inconceivable a short time ago. It was a break with the norm, with expectations. That always is cause for conflict. (Both Hans and my father-in-law were very forward thinking men though, and generally supported their sons in change.)

I think of the small farmers we worked with in Zambia, and how we were sometimes frustrated in the resistance to change we saw there. Zambian farmers are even more deeply steeped in tradition than the older Swiss farmer with far less exposure to other ideas. No one changes easily. Why should we expect it of them?

6 Responses to In the span of a lifetime: by hand, mechanization, then digitalization