At the top of the Maslow Pyramid

Farmers play a big part in making Switzerland the beautiful country it is.

Last week I followed an inspector around some of the meadows in our corner of Switzerland. Paul Leu was checking to see if the meadows, hedges and fruit trees were eligible for a new government agriculture subsidy program that was aimed at maintaining and increasing certain indigenous plant populations. Some of these fields used to produce a heavy crop of wheat or at least hay. But that’s not what farmers in Switzerland are paid to produce anymore. The emphasis is on sustaining and improving the environment for birds, insects, and small animals. If Leu found six of the plants on his list, and that uniformly over the whole meadow, it would be eligible for the subsidy program. The hedges have to have at least five and those only indigenous shrubs, 20 per cent of which must be thorny so certain birds would find protection. Orchards must have at least 10 tall fruit trees, at least three varieties (for example, cherry, plum, apple), in at least 20 square meters, all not further than 30 meters apart. Paul had to know how to count and measure!

The government introduced another new subsidy – a landscaping incentive. It pays for farmers to plant a rose bush at the end of their row of grapevines; to keep a clean yard, with flowers blooming on the windowsills; to keep the traditional fruit orchard out back. It pays to increase field rotation to seven crops – more crops give more colour and variety to the landscape. Farmers are being reimbursed for their part in making Switzerland the beautiful country it is. Looking at it that way, it’s only fair. That’s what tourists come to see, after all – old farmhouses with windows covered in swaths of red geraniums, happy cows on flowering alpine meadows.

Blooming climber on an old farmhouse. It’s a real treat to hike or bike through Switzerland right now.

“We can import all the food we need,” Paul told me cynically. “But we can’t import the flower meadows.” Fourteen per cent of the Kanton of Schaffhausen’s agriculture land is now ecologically sensitive area. Many farmers struggle with this new twist on their identity. They prefer to be producers, not landscape gardeners. But if flower meadows pay the bills better than wheat, so be it. Tourists will still see wheat fields, but often they’ll be interspersed with red poppies. It makes for scenic hiking and biking. 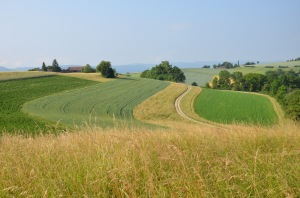 It’s true – the many colours of different crops make for a rich landscape.

It all feels pretty trivial after coming back from Zambia, where we and many others, including the Zambian government, are trying to help farmers produce better and more, so they have enough to eat. Here in Switzerland we’re more worried about providing food for our environment than for our people. I guess that’s what it’s like to be at the top of the Maslow Pyramid!