What do Africans think of Mzungus (whites)?

Last night I had tea with my friends Vivienne and Margaret.
“Tell me, Marianna, what do the Mzungus think of Africa and Africans?” Margaret asks. (Mzungus is the term for Westerners, or whites as they call them here in Zambia.) 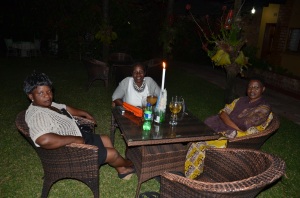 The middle class in Zambia is growing. A girl’s night out at one of Kitwe’s finer restaurants.

“I will tell you, if you will then tell me what Africans think of Mzungus,” I reply. Margaret nods. Then I describe the first thought of most Westerners who have not been in Africa – Africa is a hopeless case. One tribal war after another. All those billions of dollars sent as aid, and where is it? Same old, poverty has not changed. Africa is not moving forward. They think of starving children, of AIDS, of poverty, of desert.

Shopping malls full of vehicles are not a strange sight in Zambia.

“But why do they think like that?” Margaret is indignant, as she should be. We are sitting in a quite comfortable home, eating well. Her children and grandchildren are doing well, as many Zambians are. Zambia is a beautiful country, fertile, with many big farms. Cities are congested with the growing number of cars, because of a growing number of more prosperous people. Buildings are going up everywhere. There are still many people who are hungry, there is poverty, but there is so much more.

“That’s what they see on the news. That’s what television reports. Sudan is fighting again. The tribal wars in Congo. The AIDS situation. That’s what they hear from the NGOs who need money for their programs for orphanages.”
“But why do they report like that?”

“They need sensations to report. Good news is not sensation. And anyway, the hard things need to reach the world. And the evening news is short.” Margaret knows herself, this is all true.

“Mzungus are all very rich,” Margaret now says. “They are all well educated and happy. There are no problems there such as we have. They all drive cars and live very comfortably. In their countries there is no corruption or poverty. Everything is nice. Things work very well. So when an African sees a Mzungu, they think he has money. That’s how I think and I think that’s how most Africans think.”
“I also used to think like that,” Vivienne adds. “But when I took the Peace and Reconciliation course we did much research. We found that there are wars in European countries. That not everyone is rich. Now I think differently.”

I tell them how things are in Europe and North America. That we have many poor people too, of soup kitchens and food banks. The women are incredulous. I talk of the divorce rate, of corruption scandals. It is true that the West is doing much better than Africa, of course. But the picture most Africans have is as faulty as the Mzungu picture of Africa.

There are many people in both cultures who see a truer picture, but I think the above perceptions are the norm. Both perceptions are faulty. Yet we act out of them. We need more exchanges such as the one we just had. I hope Margaret and Vivienne will tell others of our conversation.